A perennial issue that has come up in all general elections of the past decades is the end of the two-party system.

Ahead of the 2019 GE, taking place in less than three weeks, the Social Market Foundation invited three political experts to discuss the following question: Will the 2019 General Election be the death of the two-party system? DRD Partnership’s Bianka Weber and Antonia Kendrick bring some further insight to the topic below.

The death of the two-party system?

The potential death of the two-party system has become increasingly prominent ahead of the upcoming General Election as polls have shown a significant decline in support for the two main parties and a steady rise in support for smaller parties. What will this mean for the 2019 General Election? Is it the end of the decades-long predominantly two-party system in the UK?

Well, to give an educated guess, no. HOWEVER, there are several factors that can and will almost certainly affect the outcome of this election.

Roger Awan-Scully, Professor of Political Science at Cardiff University, suggested that voters are going through a phase of disillusionment as they often feel that the main parties’ policies have stopped working. Moreover, division between the countries within the UK has become even more pronounced. The two-party system continues to largely prevail in England and Wales, but Scotland and Northern Ireland are more removed from the system, experiencing a rise in national identity which allows voters to support parties which specifically reflect their interests.

Meanwhile, voters who still strongly support the Tories or Labour are the exception, not the rule. All speakers agreed that greater voter volatility will be a dominant factor in this election. The research of Paula Surridge, Senior Lecturer of Social Sciences at the University of Bristol, shows that the political party system is pulling apart as voters of the same party are divided by that party’s Brexit choice. Her guess is that come 12 December, none of the constituencies are safe and there are several potential outcomes given such a volatile electorate.

Stephen Bush, Political Editor at the New Statesman, highlighted that the party potentially capable of breaking up the two-party system is the Lib Dems. However, Bush pointed out that although there is a large group of voters who dislike both Brexit and Labour leader Jeremy Corbyn, few dislike both enough for the Lib Dems to capitalise. He argued that voters leaving Labour are more likely to vote for the Tories because they are seen as a safe choice. Unless the Tories ‘mess up’, the Lib Dems are unlikely to break up the current two-party system, particularly given that first-past-the-post voting favours a two-party landscape.

This is shaping up to be a populist election. Parties can and will promise the world to their voters to gain support, and as manifestos aren’t legally binding documents, they are safe from being held accountable for most ‘electoral giveaways’. The only issue where the electorate may truly want to see results is Brexit. Voters usually make their choices about the importance of certain policies and choose to vote for the party that represents most of them. However, this election is different since Brexit has caused divisions within each political party, and each of them focuses on that specific policy rather than a wider campaign as a result.

Back to our original question – will this election be the death of the two-party system? Probably not, but the system is nevertheless under serious pressure. Brexit, voter volatility and skepticism, the performance of nationalist parties within Northern Ireland and Scotland, and political polarisation will all affect voter choices on the 12th of December. Several scenarios are possible in a system where two and a half parties are vying for the support of three and a half countries. 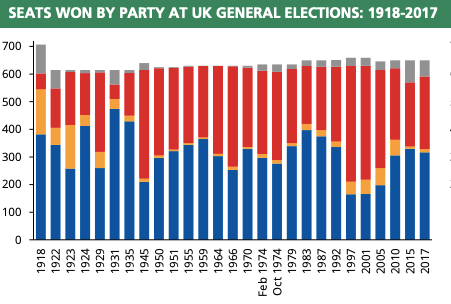 Despite pressure in the two-party system, the two major parties have won over 90% of seats for decades.