Jobs for the boys:  Boris Johnson did his best to take the sting out of the MPs’ second-jobs scandal. Firstly, he trumped Keir Starmer’s reform proposals by writing to the Speaker to suggest that any MP’s outside roles, paid or unpaid, should be “within reasonable limits”. Those limits, of course, are as yet undefined. Secondly, he semi-apologised to his MPs for the car-crash fortnight he’s led them through. This is not the last the public will have heard of the issue, as the ‘reformed’ system will have to return to the Commons in due course for approval.

Just not cricket:  Scandal has rocked the heart of English cricket, after former bowler Azeem Rafiq gave a round of interviews alleging a remorseless culture of racism at the heart of Yorkshire County Cricket Club. His intervention culminated in a blistering and emotional testimony to the DCMS Committee, which pointed a finger at the very top of the national game. The financial impact is already being felt. As the scandal unfolded, a queue of Yorkshire’s primary sponsors (Nike, Yorkshire Tea, Tetley’s) have pulled stumps on their backing of the County. At a national level, Sport England has threatened to pull its £2.5m annual funding line to the English Cricket Board (ECB) unless material action is taken to address the issue. Nigel Huddleston, the Sports Minister was unequivocal, warning that unless the ECB proved it could regulate the game properly, the Government would legislate for somebody else to do just that. ECB Chief Executive, Tom Harrison, has come under fire in the wake of the scandal. He faced a meeting of the game’s executives today, and there was criticism of his £2.2m bonus in a year when the game was under financial pressure.

Little Britain: A Chinese state-backed newspaper had a lot to say after a conversation leaked two weeks ago detailing a private talk last year between Foreign Secretary, Liz Truss, and the British ambassador to China, Caroline Wilson. Wilson questioned Truss’ harsh stance toward China, asking why the government doesn’t treat China, “like we treat the French”. Truss allegedly replied, “because the French aren’t committing genocide”, in reference to the treatment of the Uighurs in Xinjiang, a sensitive topic amongst UK officials. The Chinese tabloid newspaper, The Global Times, picked up on the spat and did not hold back on their opinions of Truss, describing her as, “one of the most hawkish members of the Cabinet on China”. The piece went on to call out France’s alleged involvement in the 1994 Rwandan genocide, “this is not Great Britain, this is Little Britain”—a scathing attack on British foreign policy.

TFL talks: Just after the London Underground’s night tube service is due to restart, a series of strikes are beginning on the network next week. Starting at 4:30am on Friday, there is set to be a 24-hour walkout on all five Night Tube lines- Victoria, Central, Northern, Jubilee and Piccadilly, with following action continuing throughout December. This planned industrial action comes as a result of  ‘impossible and unreasonable’ demands placed on workers, the RMT union stated. They elaborated that the reopening of the services will ‘wreck the work life balance’ of the staff and it could have been avoided if the Tube management hadn’t fired Night Tube staff to cut costs. Many are criticising the strike amidst recent concerns surrounding women’s safety at night-time. However, RMT Union General Secretary Mick Lynch disputed this arguing it is the RMT who had consistently campaigned for the constant physical presence of visible staff at stations and on platforms. Both the RMT and Transport for London remain open to further talks.

Science experiment: More public money for science was announced in October 2019, when the Queen’s Speech confirmed the government’s plans to develop a new scientific research funding agency. A new model was proposed: the Advanced Research and Invention Agency (ARIA), a high-risk, high-payoff research strategy to provide more funding in science. The Bill providing for ARIA is now at committee stage, and has so far received a positive stakeholder reception. However, ARIA’s chances of success, hinge on consistency and ‘continuity’ of funding. One to watch.

Next on the international agenda: Next week the President of Israel, Isaac Herzog and his wife Michal, will visit the UK. During the three-day trip, he will meet the Prime Minister, parliamentarians, and leaders of the UK Jewish community. Mr Herzog is hoping to discuss the fight against climate change and Iran’s nuclear program. Alongside this he hopes to discuss national security, cybersecurity, trade and the fight against antisemitism. The visit comes in the weeks following Tzipi Hotovely, the Israeli ambassador to the UK being forced to leave a Q& A at the London School of Economics. While no arrests were made, the protest was criticised by politicians with Keir Starmer calling the protest “totally unacceptable.” He added, “intimidation and threats of violence will not be tolerated.” Ahead of the visit it was also announced today by Priti Patel that Hamas will be proscribed by the government under the Terrorism Act. This means anyone who expresses support for Hamas, flies their flag or arranges meetings for the organisation will be in breach of the law.

Rail Replacement Service: Boris Johnson angered Northerners and MPs alike on Thursday after he announced a significantly watered-down version of the £96bn ‘Integrated Rail Plan.’ Whilst the plan aims to improve rail links in the Midlands and Northern England, Johnson has since scaled back two of his schemes. Notably, this includes significant cutbacks to the Northern Powerhouse Rail project, something which Johnson personally reaffirmed a commitment to in his party conference speech only a month ago. While embarrassing for Johnson, this cutback will have tangible impacts on local communities and the extent to which Northern regional economies are boosted. Bradford, a city which has the worst rail links of any large city in England, is generally considered to be the biggest loser of this new plan, with the updated route bypassing it altogether. Levelling up is starting to ring hollow in the ears of voters and northern Tory MPs alike.

TERRORISM: Moving Past the Blast

DRD Analyst, Harry Barber, formerly of the Political Section at the United Nations Counter Terror Executive Directorate, looks ahead to steps which the U.K. Government can take following the terrorism incident at Liverpool Women’s Hospital on Remembrance Sunday.

A pair of lone actor terror attacks have refocused the minds of the United Kingdom squarely on terrorism in the past month. Just over a month ago, Sir David Amess MP was stabbed to death in his constituency of Leigh-on-Sea, which was later deemed an act of terrorism by the Metropolitan Police. A second terror incident took place outside Liverpool Women’s Hospital on Remembrance Sunday, as a lone perpetrator detonated a makeshift explosive device in a taxi outside the hospital at 11:00am. Britain had just fallen silent for the customary two minutes to remember the service and sacrifice of those who have died defending the national interest. The alleged perpetrator was killed in the blast and one other person sustained injuries.

The Tribune – The Making of the Microflat

The Economist – Why is India clinging to coal?

Despite this week’s news, research shows that the North isn’t the only part of the UK missing out on high-speed rail as we lag behind Europe… 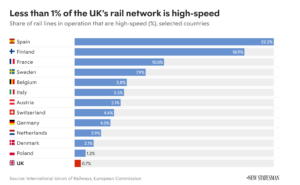