Sorry, not sorry: It has been a very unusual couple of days within the walls of Westminster Palace. Owen Paterson, the MP for North Shropshire, has resigned following a public uproar in response to an investigation into lobbying claims by the Committee for Standards. A Committee report had found that Mr Paterson had received more than £100,000 a year as he lobbied the government on issues pertaining to clinical diagnostics company, Randox and meat distributor, Lynn’s Country Foods. The Government initially stood by their MP, calling for a shake-up of the standards watchdog and the way MPs are policed. However, in the subsequent vote 13 Tory MPs revolted despite being whipped. The vote still passed but was subsequently reversed once the Government became aware of the overwhelming opposition, both from without and within. On top of this Paterson seemed unrepentant, giving an interview on Sky News, saying “I would do it again”. The Commons is still winding down from the ensuing chaos and we can look forward to some interesting commentary in the coming days. Perhaps Boris will come to regret this particular U-turn, seeing as his case is being decided by the same commissioner in the coming weeks.

Plan B: Covid cases are on the rise. Westminster revealed all on Wednesday: that events had been cancelled following a rise in covid cases. The UK Health Security Agency waved the red flag stating that the Westminster estate had a spike in transmission risk. Consequently, three requests were made to MPs: that they practice greater social distancing, wear a mask where possible and conduct meetings remotely if viable. This all sounds very familiar, bringing to mind old phrases, like ‘stay at home’, ‘stop the spread’ and ‘work from home’. So, the question arises, as covid cases get higher all over the country, why is parliament enforcing Plan B for themselves and no one else? Nevertheless, following the photos of the Prime Minister next to the Nation’s National Treasure, 95-year-old David Attenborough, we might assume Mr Johnson isn’t taking mask wearing too seriously.

The French Fish spat: Hot waters have been bubbling across the channel this week as friction escalates between Britain and France over post-Brexit fishing agreements. The tensions mounted last Thursday when the French seized a Scottish trawler, Cornelis Gert Jan, accusing the skipper of fishing in French waters without a license. However, the trawler remains a much smaller fish in a wider sea of disputes. The row is driven by French accusations that the UK has been denying permits to French fishermen and escalated further when the French threatened to block British boats from accessing their ports, as well as a reinforcement of checks and controls. Whilst Cornelius Gert Jan made its way back home on Thursday, it would appear Britain and France are determined to remain at odds. Potential progress from France earlier in the week was futile in its efforts to impede David Frost’s Brexit agenda at talks with Clément Beaune on Thursday. This leaves the dispute very much unresolved and begs a wider question of what is to become of the Anglo-French relationship in post-Brexit years?

Boogie Wonderland?: Nightclubs have been a point of contention over the last few months. After the dance floor reopened on ‘Freedom Day’ the question remained whether these venues could become super spreader hotspots, with teenagers waking up with more than just a hangover. Unfortunately, it is not just the lack of ventilation and social distancing that clubbers need to worry about. There is an increasing concern for individuals’ safety when going on a night out. Next week, Parliament will debate a petition urging the Government to legally enforce nightclubs to search guests on arrival to prevent harmful weapons, or drugs entering the venue. This debate is particularly relevant as there is a worrying spiking trend in the UK, with dozens of reports of people being spiked with needles in clubs. Hopefully the Government will act sooner rather than later to give the public reassurance that they can safely dance the night away.

Peers go Digital: The Economic Affairs Committee is to hold its first oral evidence sessions on Central Bank Digital Currencies (CBDC) next week. The Committee’s inquiry is looking at the main issues confronting HM Treasury and the Bank of England as they explore the potential of a possible CBDC for the UK. It will also examine how a CBDC might affect the role of the Bank, monetary policy and the financial sector. Given that the average age of a Peer is 70, we think the exploration of digital currencies is an interesting path to go down. Less than a month ago the G7 published a report into CBDCs stating that any digital currency issued by a central bank must “support and do no harm” to the bank’s ability to fulfil its mandate on monetary and financial stability, and must also meet rigorous standards. Only time (and a room full of Peers) will tell us what the outcome will be for the future of CBDC use in the UK.

Another recession: The House of Commons will rise for a short recess this Tuesday, followed by the Lords a day later, who need an extra day to bag up all the ermine. Both will return on 15 November. But haven’t they just had a holi…I mean ‘recess’? They have indeed. A short break around Remembrance Sunday is a traditional fixture of the parliamentary timetable, as is one around conference time. As conferences were a little later than usual this year, they’ve fallen only 3 weeks apart. On its return, the House will consider the Lords’ amendments to the Social Security Bill, Labour will have the opportunity to put forward a motion on ‘Opposition day’ and some private members bills, covering everything from pedicabs to kids clothes to mousetraps, will optimistically look to get past second reading.

Code Red: If your political affiliations run with the Opposition, you might have noticed a concerning email in your inbox earlier in the week. On Wednesday the Labour Party confirmed that it had been involved in a ‘cyber incident’ that had compromised and rendered inaccessible a significant amount of its members and supporters’ data. The third party which handles Labour’s data informed them of the incident on October 29th and the Information Commissioner’s Office and National Cyber Security Centre are looking into it. The incident has left many angry with the lack of information Labour has offered to its members over the incident. Key questions such as: ‘who is the third party?’, ‘how many users have had their data compromised?’ and ‘does it involve sensitive data?’ are still left unanswered. Many more were outraged over the fact their data had been compromised, despite the fact they were no longer members.

DRD Partner, Pete Bowyer, chair of the Advisory Board of Climate Home News and a veteran of COPs dating back to Copenhagen in 2009, takes a look at the chances of success at this year’s COP26 as we end the first week of the Conference.

We’re approaching the halfway point of COP26, and Boris Johnson has described the world as being 5-1 down at half time in the battle against climate change, but that COP26 gives us an opportunity to equalise. If that is the case, we can expect to be in for a hell of a second week in Glasgow.

Not respecting your elders...

The Spectator –The flaw in Britain’s net-zero plan

Politico – Why Facebook Is More Worried About Europe Than the U.S.

The Economist – Could A Leicester East By-Election Mean The Return Of Keith Vaz?

Stat of the Week 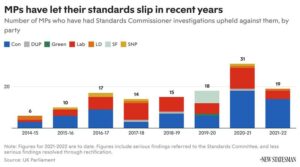